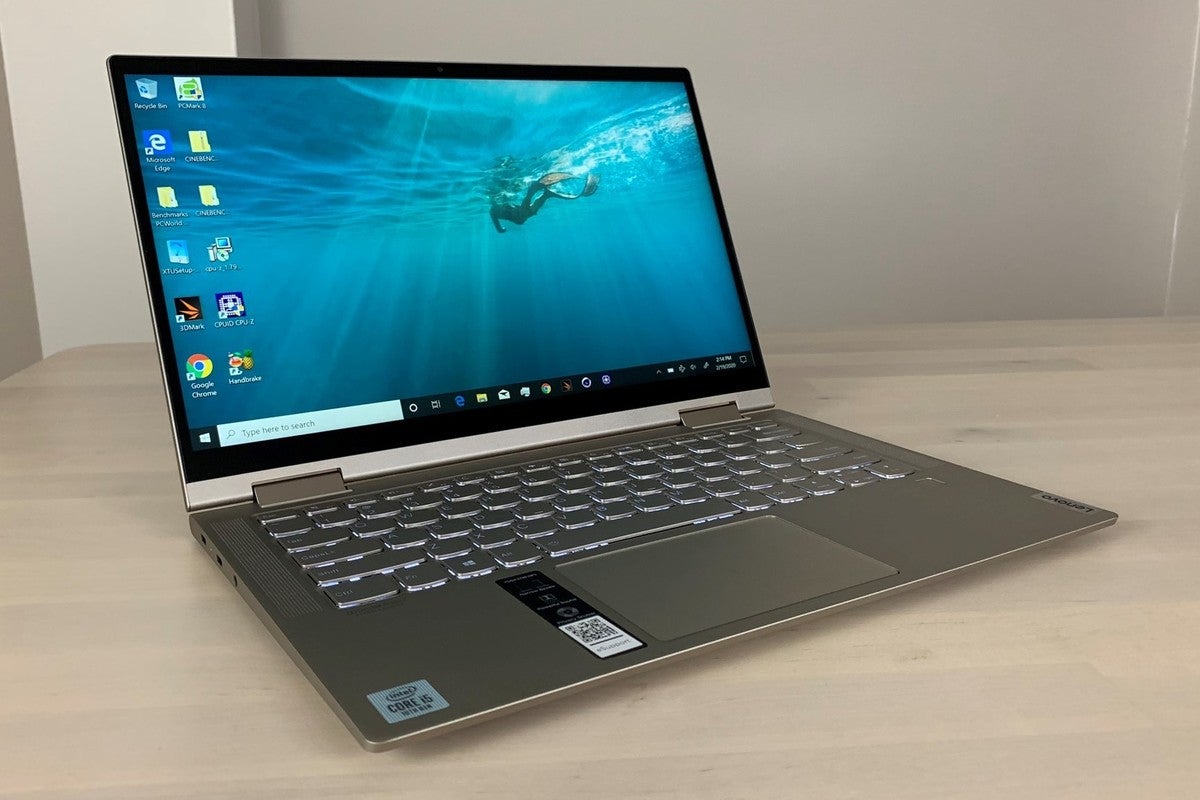 The Lenovo Yoga C740 14 is one of the most impressive 2-in-1 laptops we've seen in its price range. Weighing in at just three pounds and jammed with nifty features, the slim, sturdily built, Yoga C740 packs in plenty of productivity pep, and it can last the whole day without its AC adapter. A bright, Dolby Vision-enabled display plus Dolby Atmos sound provide plenty of eye and ear candy. A physical camera shutter (which, unfortunately, is a little tough to slide open and closed) and a fingerprint reader help to bolster security.

In a world where high-end laptops no one can afford get all the attention, and budget laptops can be a bucket of compromises, it's nice to see a mid-priced laptop that has so much going for it. The Lenovo Yoga C740 easily earns our Editor's Choice award.

This review is part of our ongoing roundup of the best laptops. Go there for information on competing laptops and how we tested them.

Lenovo offers three SKUs for the Yoga C740, ranging from the model we tested (currently $790 on Lenovo.com) to a high-end $1,010 configuration. Our review unit comes with a 10th-gen, quad-core Intel Core i5-10210U Comet Lake processor (which is built on the older 14nm architecture found in Intel’s 8th- and 9th-gen CPUs, versus the 10nm chips in Intel’s more powerful Ice Lake lineup). Let’s take a closer look at the specifications of our particular Yoga C740:

The pricier $880 and $1,010 SKUs each boast Core i7-10510U Comet Lake chips, 8GB and 16GB of RAM, and 512GB and 1TB SSDs, respectively. All three laptops come equipped with 14-inch full-HD touchscreens that feature Dolby Vision HDR, which is designed to deliver high-contrast images.

Overall, our Yoga C740 unit is a pretty solid configuration for a $790 system. While the quad-core Comet Lake CPU doesn’t offer a dramatic boost over previous-gen Whiskey Lake chips, it should still deliver more than enough horsepower for everyday computing needs, along with some added oomph for video encoding and other processor-intensive activities. The 8GB of RAM is standard for a laptop in this price range and should help to smooth over any multitasking bumps, while the 512GB SSD is roomy enough to install plenty of apps along with a modest media collection. The full-HD display should have wide viewing angles thanks to its IPS (in-plane switching) technology, while the Dolby Vision HDR should give visuals some added pop.

We’re also impressed that this 2-in-1 laptop weighs only three pounds. We generally expect similar-sized convertibles in this price range to weigh closer to four pounds.

Lenovo sticks with the tried and true when it comes to the Yoga C740’s design. The update boasts the same smooth, fingerprint-resistant lid and tapered left and right sides as previous Yoga models. Of course, the C740 also boasts the familiar Yoga 360-degree hinge, which lets you swivel the laptop’s display all the way around for tablet use, tent it on a tabletop, or place it with the keyboard facing down and the screen tilted up. 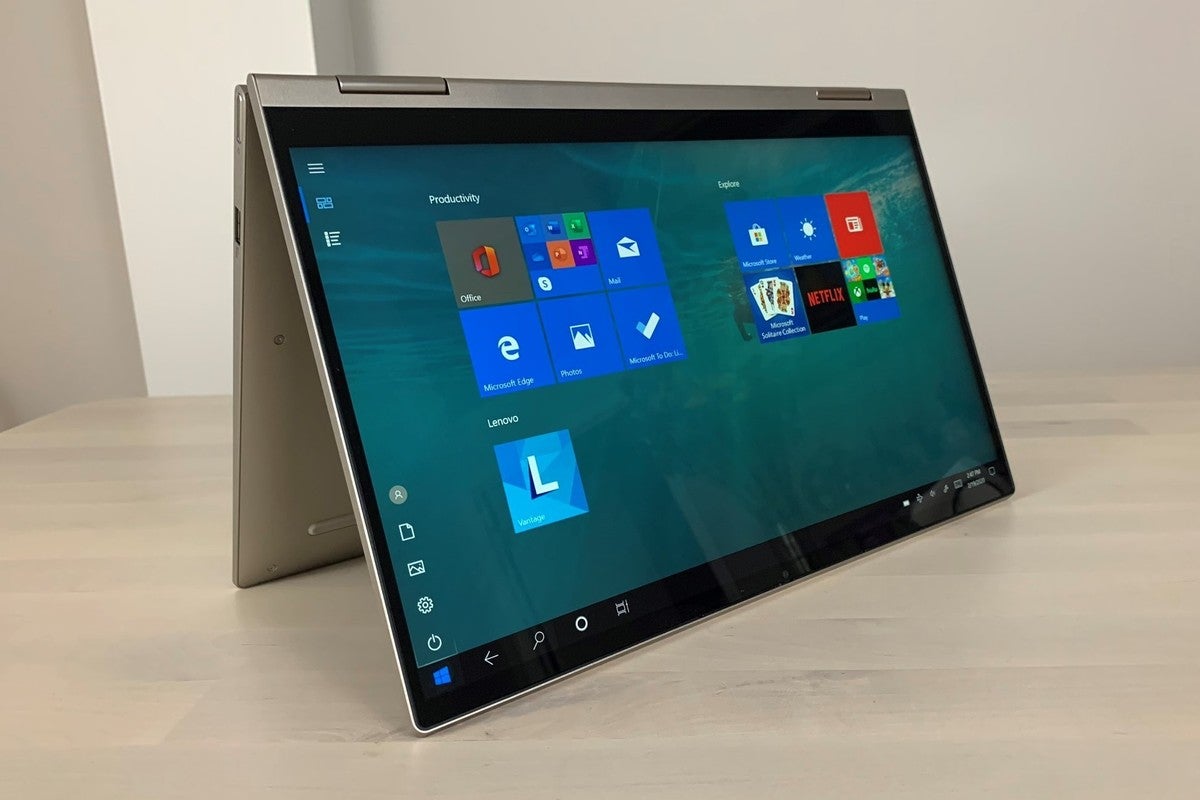 The Lenovo Yoga C740's 360-degree hinge lets you swivel the display all the way around for tablet use, or you can tent the laptop on a flat surface.

The Yoga C740’s aluminum chassis has a sturdy, premium feel. The power button sits on the right side of the laptop up near the hinge, making it difficult to press by accident. The left, right, and top bezels of the C740’s anti-glare display are relatively thin, although the bottom bezel is (typically) somewhat thicker.

Speaking of the display bezels, the 720p webcam that’s embedded in the top bezel sports a physical “TrueBlock” privacy shutter, a handy privacy feature that we don’t see often on laptops in this price range. However, I had a tough time getting a grip on the tiny switch that slides the shutter (those with longer fingernails will have better luck), and there are no obvious visual cues that let you know whether the shutter is in its open or closed position. 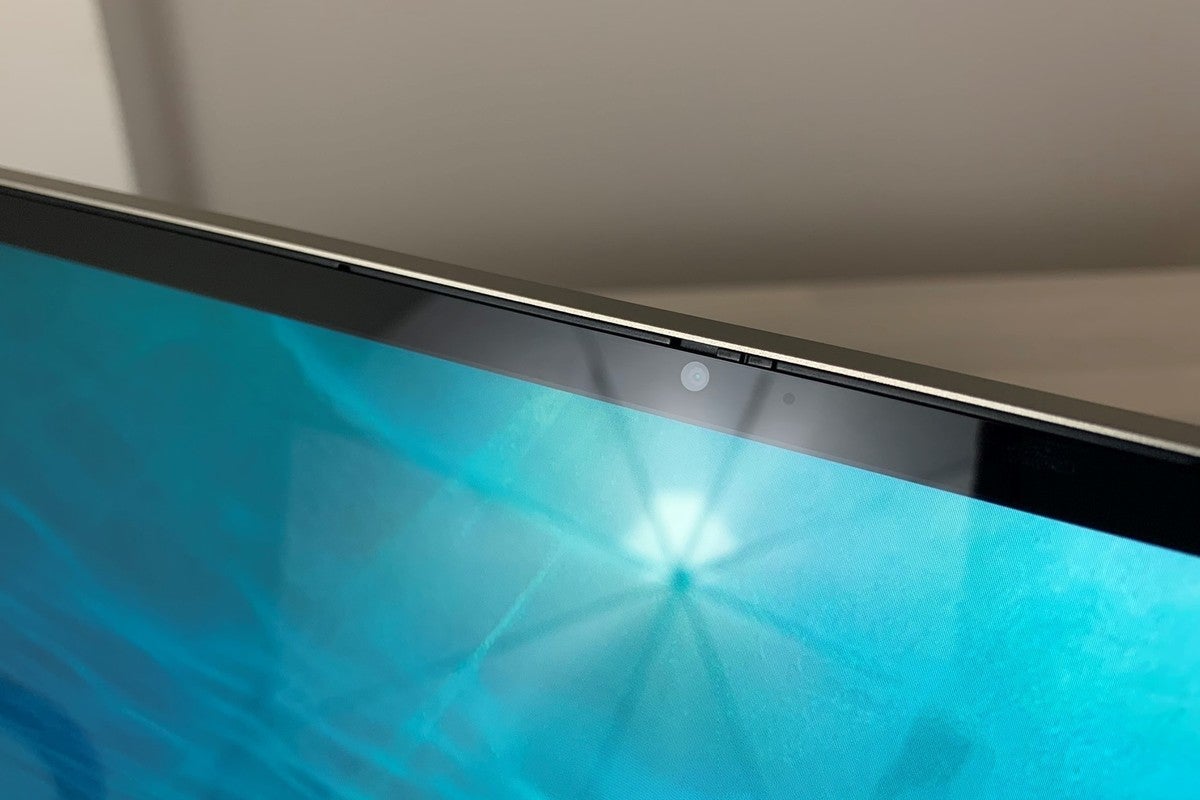 The Lenovo Yoga C740's physical camera shutter is a handy privacy feature, but the tiny notch can be tough to slide.

The Yoga C740’s full-HD and touch-enabled display is one of its best features. First of all, it’s relatively bright, measuring more than 350 nits (or candelas) according to our readings. That’s well above our minimum 250-nit standard for optimal indoor viewing, and a welcome surprise given the C740’s sub-$800 price tag. The IPS display also (and unsurprisingly) boasts impressive viewing angles, with the screen dimming only a tad when viewed from the side or from above or below.

Even better, the C740’s display supports Dolby Vision, a dynamic HDR format that allows for vivid color and deep, dark black levels when you’re watching supported content. Taking a gander at the Dolby Vision-enabled Altered Carbon on the Netflix app for Windows, the dark, stormy landscape of the futuristic Bay City contrasted impressively with the bright blue sky above the clouds. You can also listen in Dolby Atmos over the Yoga’s integrated speakers (which we’ll cover in a moment).

I thoroughly enjoyed my time typing on the Yoga C740’s comfy, backlit keyboard. Lenovo wisely opted not to squeeze a dedicated numeric keypad next to the main keyboard, so it  boasts roomy, easy-to-discover keys with a generous amount of travel and tactile feedback. While the keyboard lacks media shortcuts, you do get shortcuts for muting the microphone and electronically disabling the camera. 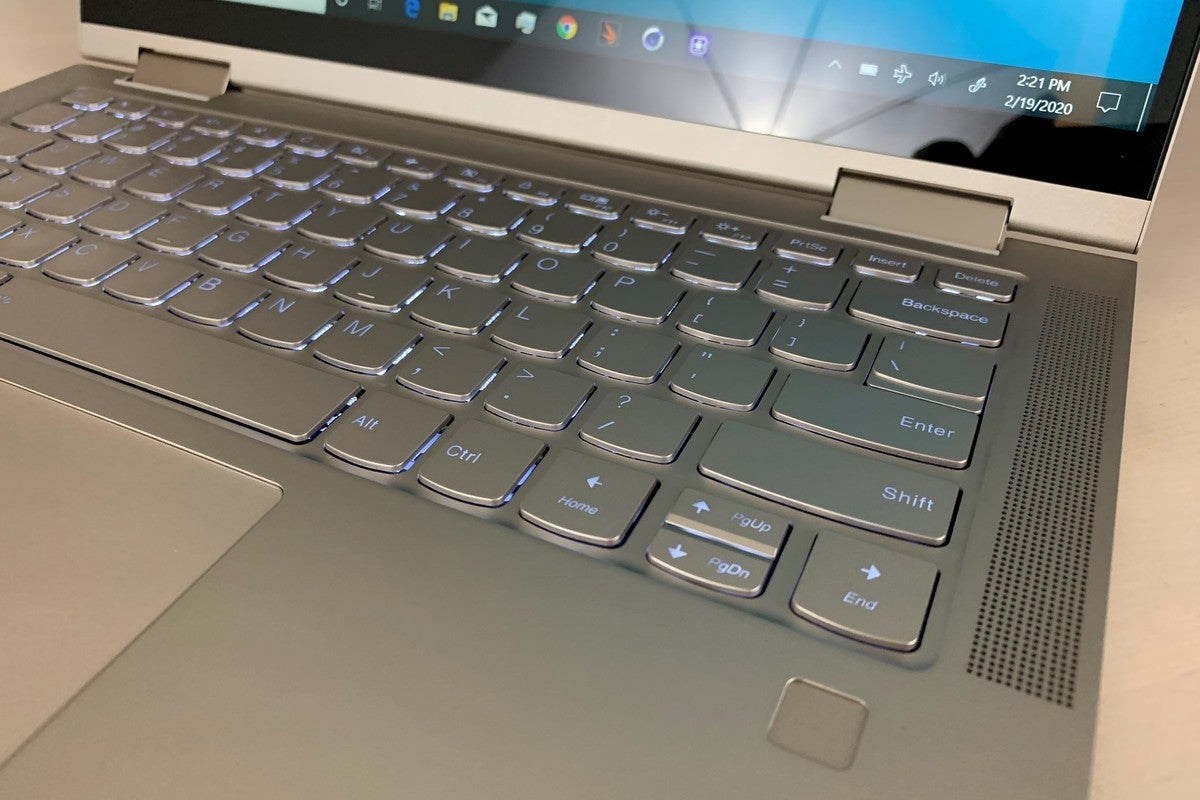 I was also a fan of the Yoga C740’s smooth, responsive trackpad. While the trackpad (per usual) requires a fair amount of pressure to click, it did a great job of rejecting false inputs, with the cursor never jittering unless I deliberately dragged my palms across the trackpad’s surface (and even then, I had to work at it).

The Yoga C740’s up-firing speakers sounded much better than your average laptop speakers, with relatively crisp and detailed audio that boasts a light dusting of bass. The speakers also feature support for Dolby Atmos, an object-based 3D sound format that’s been showing up in an increasing number of laptops, phones, and tablets. You can use the Dolby Atmos app for Windows to customize the audio effects, with a “dynamic” setting designed to pick the best preset based on the content you’re listening to. Even with their Atmos abilities, however, the C740’s integrated speakers can’t match the sound quality of a pair of decent headphones or a set of external speakers.

The Yoga C740 is a tad chintzy when it comes to ports—and indeed, you only get three, or four if you include the audio jack.

On the left side of the Yoga C740, you get two USB 3.1 Gen 1 Type-C ports, which both support Power Delivery while doubling as DisplayPorts. Also on the left side is the aforementioned combo audio jack. 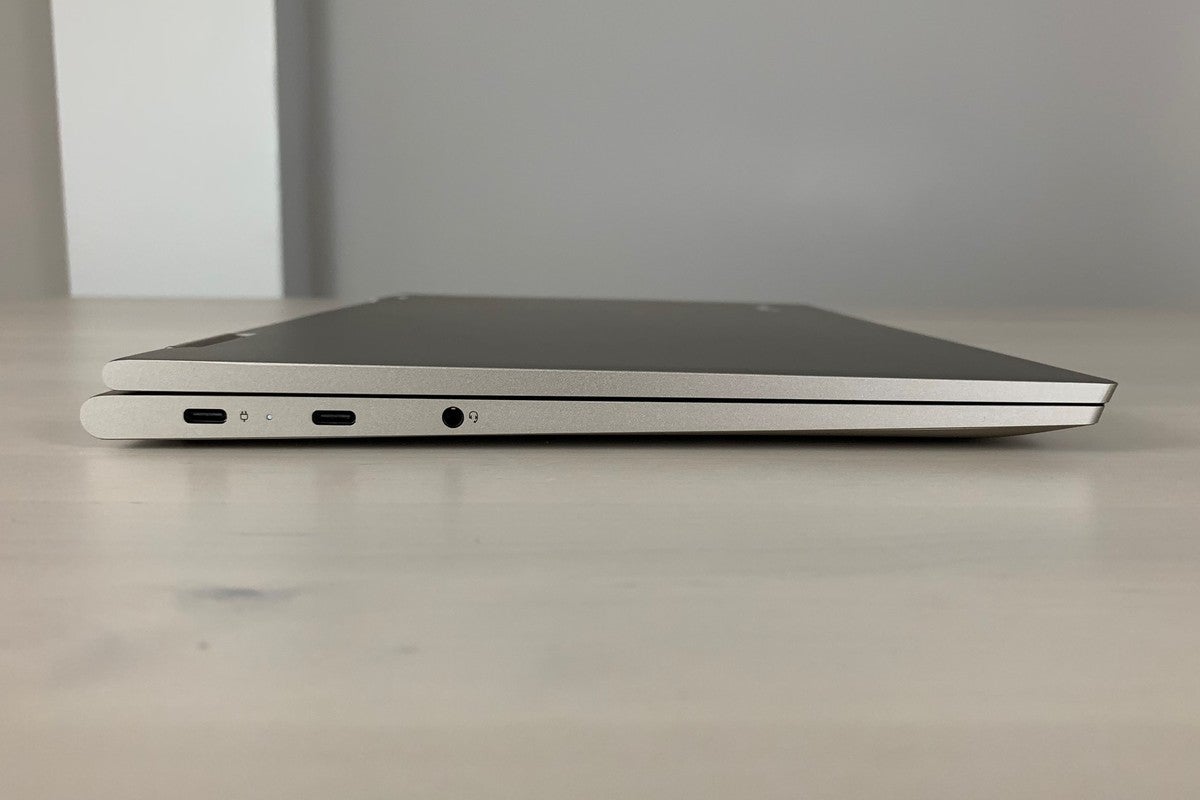 On the right side, you get a single USB 3.1 Gen 1 Type-A port, which sits next to the Yoga’s power button. 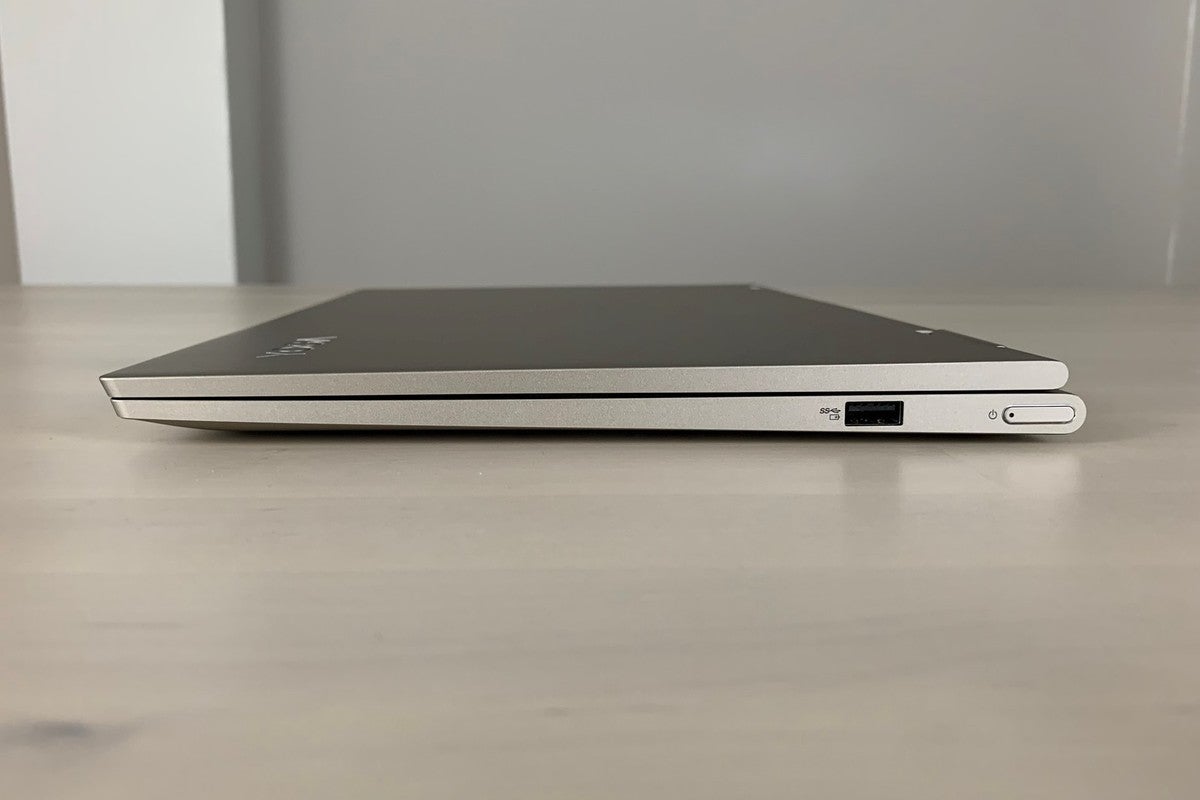 And...that’s pretty much it. While it’s always nice to get two USB-C ports, keep in mind that you’ll need to use one of them to plug in the included USB-C charging cable. Otherwise, you’re left with the one USB Type-A port. You’ll likely need a hub if you’re planning on plugging in multiple accessories with legacy USB connectors, and you’ll have to do without an HDMI port or a media card reader.

For our benchmarking charts, we’ve pitted the Lenovo Yoga C740 against a mix of quad-core laptops, most of which are powered by older 8th-gen Whiskey Lake chips, while one sports a spiffy new 10th-gen Ice Lake CPU. We also tossed in a budget dual-core system so you can see the different quad-core makes (and why dual-core is still sufficient for many uses).

As you’ll see in our results, the Lenovo Yoga C740 proved to be a solid and reliable performer both in terms of everyday PC chores as well as tougher multi-core tasks. We were particularly impressed with its battery life.

We’ll start our performance testing with PCMark 8, a benchmark that simulates such daily computing activities as web browsing, building spreadsheets, social networking, and video chat. Because most of these tasks requireonly a single CPU core, a laptop with a six-core processor won’t necessarily enjoy an advantage over a dual-core laptop. A PCMark 8 score of 2,000 or higher means you can expect silky-smooth Office performance. 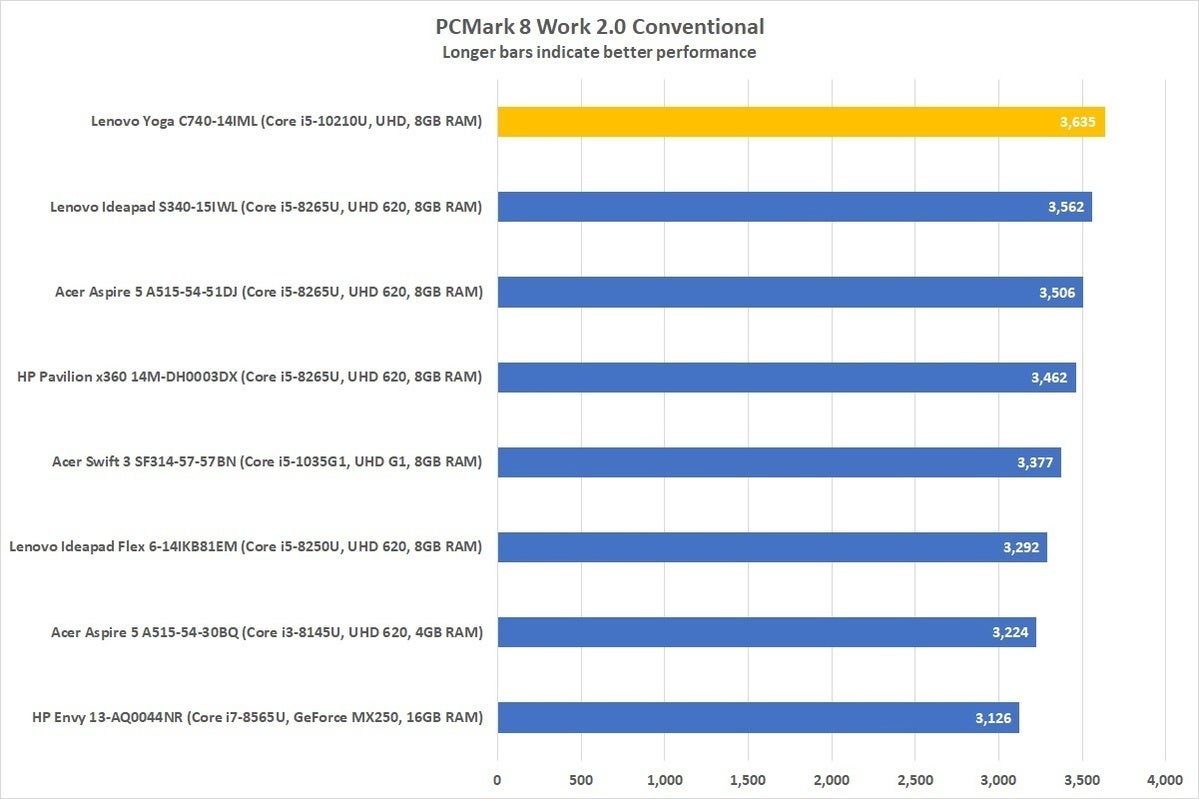 The Lenovo Yoga C740 tops our PCMark 8 benchmarking chart, which means you should expect smooth performance for everyday computing tasks.

As you can see in our performance chart, the Lenovo C740 leads the pack, although to be fair, all of the laptops in our roundup managed to snag excellent PCMark 8 scores, including even a dual-core Acer Aspire 5. While it may seem surprising that a quad-core, Core i7-packing HP Envy 13 sits at the bottom of our chart, that’s likely because its thin and sub-three-pound design demanded dialing down its performance a tad—and even then, it still passed the 3,000 mark in PCMark 8 with room to spare. Bottom line: All of the laptops in our comparison are great everyday computing performers.

A considerably more demanding benchmark than the relatively easy-going PCMark 8, our next test involves using the free HandBrake utility to convert a 30GB MKV file into a format suitable for Android tablets. It’s a multi-core, CPU-intensive, and somewhat lengthy (as in an hour or more) task that tends to spin up cooling fans. The laptops with the most processor cores generally snag the best scores. 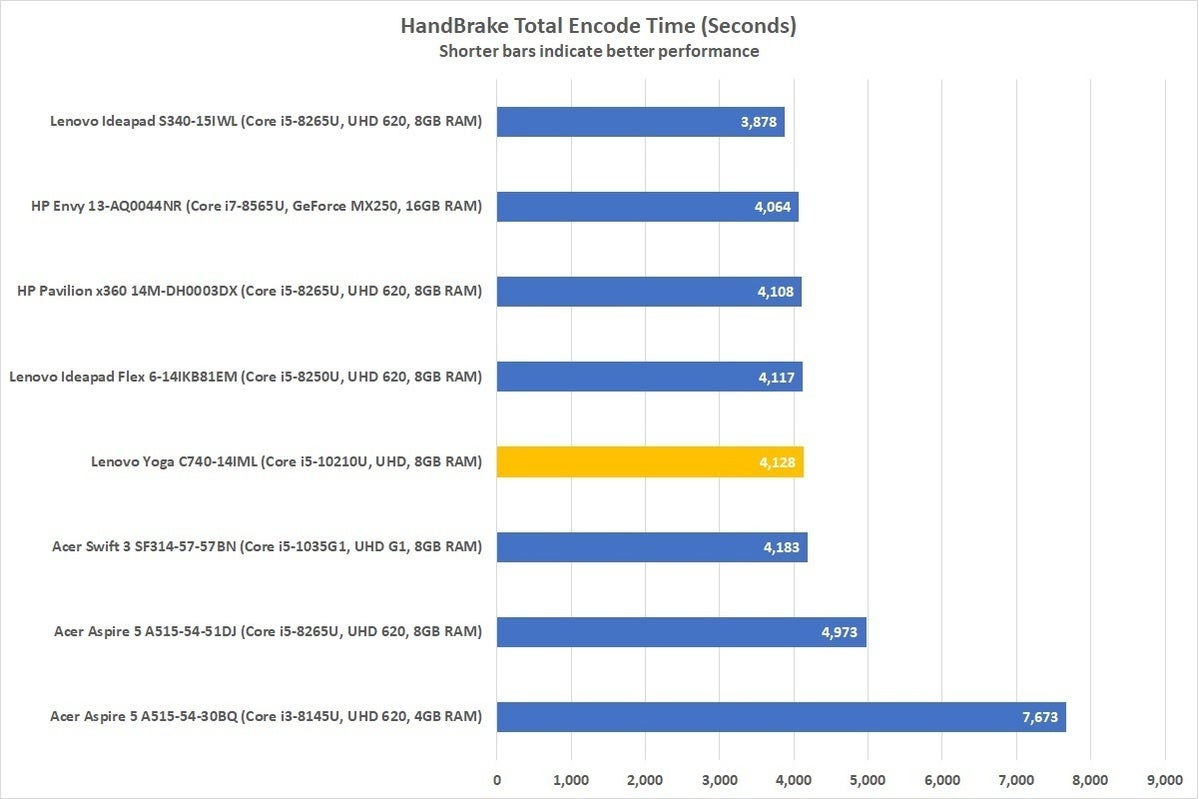 The Lenovo Yoga C740 is in a virtual three-way tie for third place in our CPU-intensive HandBrake test, but its performance still lands in the upper range of our expectations.

While the Yoga C740 fell to fifth place in our comparison chart, a closer look reveals a virtual four-way tie for second place, with a mere minute or so separating the HP Envy 13 with its Core i7 CPU and the Yoga C740. Way back in last place is the dual-core Acer Aspire 5, which serves to demonstrate the leap in performance of a quad-core CPU over a dual-core system in HandBrake-type, intensive tasks.

In any event, the Yoga C740’s HandBrake performance lands in the upper range of our expectations, and that’s a good thing. It’s also worth noting that while many laptops with older, quad-core Whiskey Lake CPUs roar their fans like jet engines during the HandBrake test, the C740’s cooling fans never rose above a gentle purr.

Our next benchmark is another CPU-crushing test, but unlike the (typically) hour-long HandBrake benchmark, Cinebench—which involves rendering a 3D image in real time—is generally over in a matter of minutes. So while HandBrake tells us how a given laptop handles heavy processor loads over a long haul, Cinebench offers a snapshot of a laptop’s CPU and thermal performance during short bursts of intense activity. 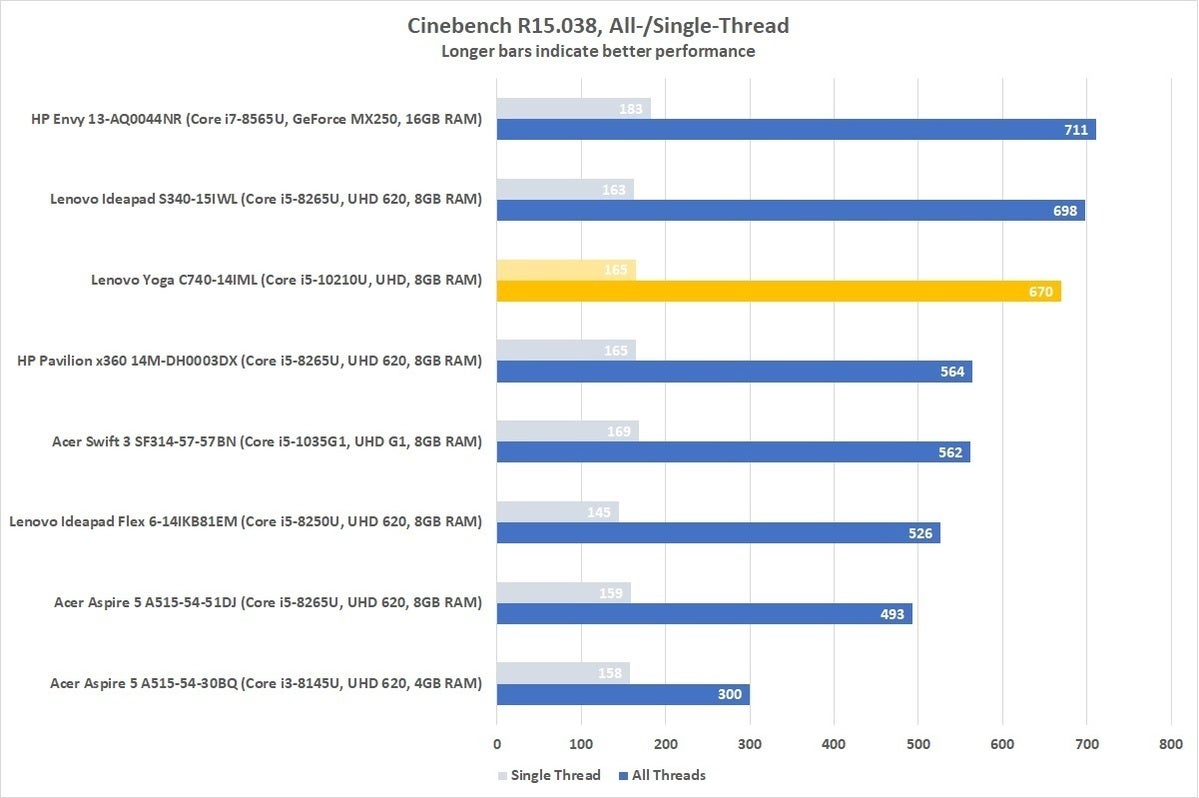 The Lenovo Yoga C740 finished in the top three for our all-threads Cinebench tests, which measures a laptop's performance under brief but intense CPU loads.

Looking at our chart, the Yoga C740 comes in at a very respectable third place, behind the Core i7-powered HP Envy 13 (which boasts a 4.6GHz boost clock, versus 4.2GHz for the Yoga C740) and the quad-core Lenovo IdeaPad S340 (a Whiskey Lake laptop that’s consistently punched above its weight). Trailing the Yoga C740 are four more Whiskey Lake laptops with sub-600 multi-thread Cinebench scores (which is more typical for 8th-gen Core i5 systems), while that dual-core Acer Aspire 5 unsurprisingly falls into last place.

Besides the multi-threaded Cinebench results, we also consider the single-thread scores to gauge the efficiency of a laptop’s single-core performance. Again, the Yoga C740 snags a solid third-place score (tying with the HP Pavilion x360), trailing the Core i7-powered HP Envy and the Acer Swift 3, a thin and light budget laptop powered by a Core i5-1035G1 Ice Lake CPU.