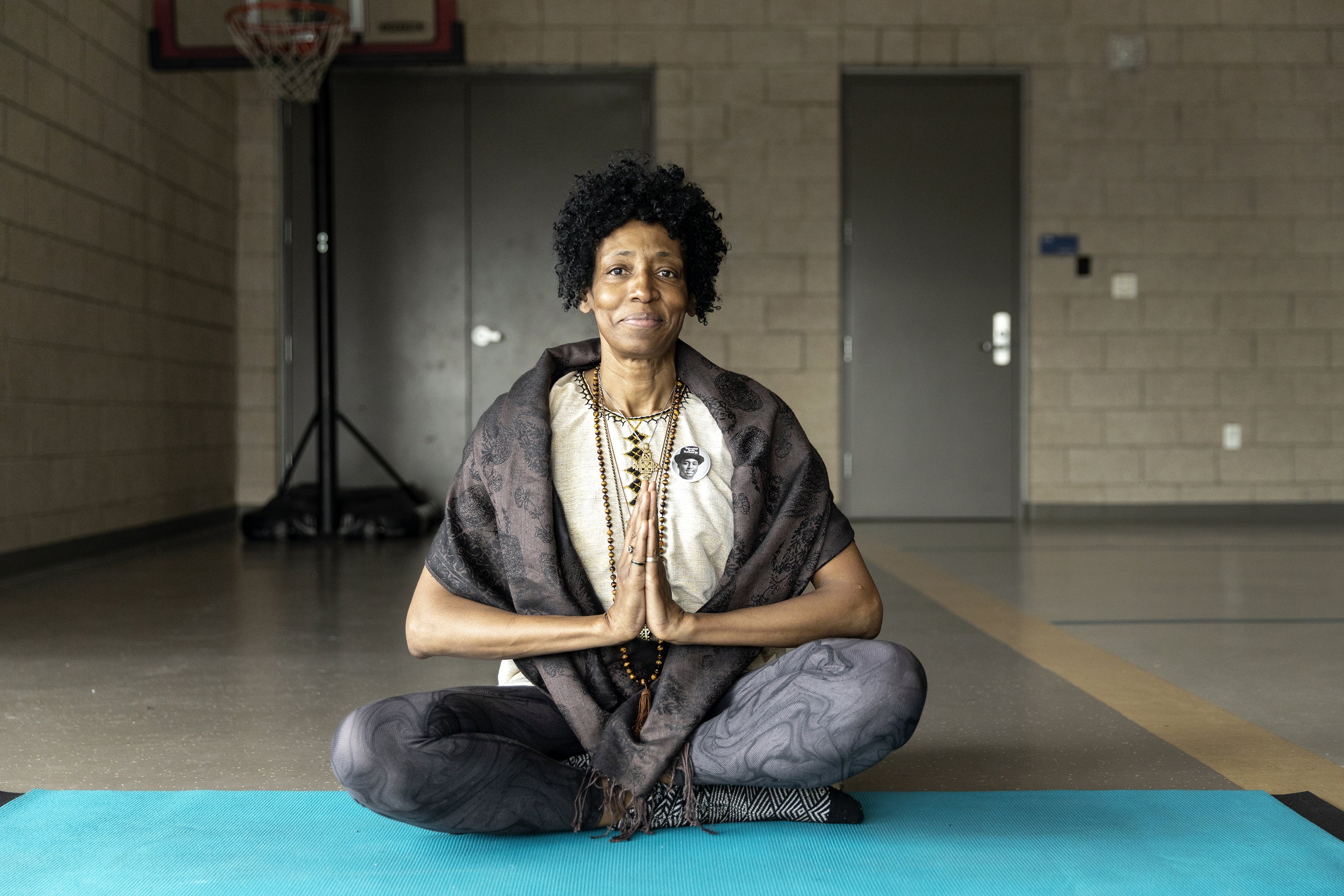 When not doting over her three children, she hosted her public affairs talk radio show, attended community meetings or handed out cups of juice at her roving Mo’ Betta Green MarketPlace farmers market, which has brought local, fresh foods and produce to Denver’s food deserts for more than a decade.

Her busy schedule came to an abrupt halt on July 1, 2018, when her youngest son, Reese, 17, was fatally stabbed outside a Denver restaurant. He’d just graduated from high school and was weeks from starting at the University of Northern Colorado.

“It’s literally a shock to your system,” Grant, 58, said of the grief that flooded her. “You feel physical pain and it affects your conscious and unconscious functioning. Your ability to breathe is impaired. Focus and concentration are sporadic at best. You are not the same person that you were before.”

In the midst of debilitating loss, Grant said it was practicing yoga and meditation daily that helped provide some semblance of peace and balance. She had previously done yoga videos at home but didn’t get certified as an instructor until just before her son’s death.

Yoga then continued to be a grounding force when the coronavirus pandemic hit in March. The lockdown orders in Colorado sent her back to long days of isolation at home, where she was the sole caregiver for her special-needs daughter and father. Then, in April, her 84-year-old mother died unexpectedly of natural causes. “I’ve been doing the best that I can with facing my new reality,” said Grant.

As a Black woman, she believes yoga can help other people of color, who she said disproportionately share the experience of debilitating trauma and grief — exacerbated today by such disparities as who’s most at risk of COVID-19 and the racialized distress from ongoing police brutality such as the death of George Floyd in Minneapolis.

While the country still needs much work to heal itself, she wants more people of color to try yoga to help their health. She said the ancient practice, which began in India more than 5,000 years ago and has historical ties to ancient Africa, is the perfect platform to help cope with the unique stressors caused by daily microaggressions and discrimination.

“It helps you feel more empowered to deal with many situations that are beyond your control,” said Grant.

She teaches yoga with Satya Yoga Cooperative, a Denver-based group operated by people of color that was launched in June 2019, inspired partly by the Black Lives Matter and #MeToo movements. The co-op’s mission: Offer yoga to members of diverse communities to help them deal with trauma and grief before it shows up in their bodies as mental health conditions, pain and chronic disease.

“When I think about racism, I think about stress and how much stress causes illness in the body,” said Satya founder Lakshmi Nair, who grew up in a Hindu family in Aurora. “We believe that yoga is medicine that has the power to heal.”

Satya’s efforts are part of a growing movement to diversify yoga nationwide. From the Black Yoga Teachers Alliance to new Trap Yoga classes that incorporate the popular Southern hip-hop music style to the Yoga Green Book online directory that helps Black yoga-seekers find classes, change appears to be happening. According to National Health Interview Survey data, the percentage of non-Hispanic Black adults who reported practicing yoga jumped from 2.5% in 2002 to 9.3% in 2017.

Nair seeks to plant the seeds for more: The co-op is trying to make classes more accessible and affordable for people of color. It offers many classes on a “pay what you can” model, with $10 suggested donations per session. Satya also hosts two intensive yoga instructor training sessions for people of color per year, with hopes to offer more, in an effort to diversify the pool of yoga providers.

Blacks and Latinos consistently top national health disparities lists, with elevated risks for obesity and chronic conditions such as heart disease, diabetes and some forms of cancer, which has made them more susceptible to contracting and dying of COVID-19. They also face an elevated risk for depression and other mental health conditions.

And a growing body of research asserts that racism and discrimination may be playing a larger factor than previously thought. For example, an Auburn University study published in January concluded that Blacks experience higher levels of stress due to racism, resulting in accelerated aging and premature death. Another study, from the American Heart Association, showed a link between Black people experiencing discrimination and developing increased risk for hypertension.

Yoga is obviously not a panacea for racism, but it has shown positive results in helping people manage stress, and as a complement to therapeutic work on trauma.

Satya co-op member Taliah Abdullah, 48, said stress brought on by a toxic work environment and family problems inspired her to finally attend classes. The effect was so life-changing that she enrolled in Satya’s teacher training.

“I didn’t know I needed this, but it’s really changed my life for the better,” she said. “I feel like now I have the tools and the toolbox that I need to better navigate the world as a woman of color.”

At a Saturday morning class Grant led before the pandemic hit, five Latina and Black women and a lone Black man sat atop colorful yoga mats in a half-circle around Grant with smoke billowing around them from a copal-scented incense stick.

Grant spoke in hushed tones during the hour-long session, leading them through cat-cow, downward dog and boat poses. The theme was more spiritual than physical, more relaxing than vigorous, as illustrated by the mantra she used to begin the class: “We are resilient, we are grounded, we are complete. And the spirit of love is in me.”

First-time attendee Ramon Gabrielof-Parish, 42, a Black professor at Naropa University in Boulder, became so relaxed that at one point he began snoring. He said that after an exhausting week he appreciated the serene vibe.

Sarah Naomi Jones, 37, who graduated from Satya’s training, said the co-op provides a safe space to bond, vent and heal — a very different vibe from predominately white yoga spaces where many people of color often feel unwelcome. She said she felt that icy reception when, as a Black yoga newbie, she attended an intensive yoga class mostly filled with white attendees.

“When I walked in, it was kind of like, ‘What are you doing here?’” recalled Jones. “The spiritual component was totally missing. It wasn’t about healing. It felt like everyone was there just to show off how much more stretchier they were than another person.”

Denver-based Black yogi Tyrone Beverly, 39, said the growth of yoga among people of color is a sign of yearning for more inclusivity in the practice. His nonprofit, Im’Unique, regularly hosts “Breakin’ Bread, Breakin’ Barriers” yoga sessions with a diverse mix of attendees followed by a meal and discussion on topics such as police brutality, racism and mass incarceration.

“We believe that yoga is a great unifier that brings people together,” he said.

Because of the pandemic, Beverly has moved all his events and classes online for the foreseeable future as a safety precaution. Satya took a brief hiatus of in-person classes, Grant said, but now offers some classes outdoors in parks in addition to daily online classes. Grant said that during the pandemic, even online classes could make a difference for individuals.