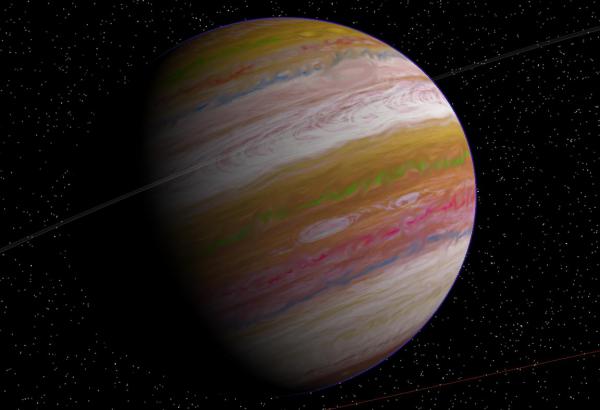 Yechida is an orange dwarf 882 light years from Sol. In orbit this star is a Jotunnian AmmoNeptunian ice giant, known as Ruach. This planet holds a rare example of a complex macroscopic ice-giant biosphere. The outermost cloud layers of this world are composed of ammonia and ammonium hydrosulphide, with many organic compounds adding colour to the bands and zones visible from space. Particularly striking are the reds, greens and blues in the brownish belt regions, which are biological in origin, visible indications of the photoautotrophs which are the basis of the Ruach food chain. The temperature of the cloudtop layer is, on average, 160 kelvin.

Most of the photoautotrophs in Ruach'satmosphereare microscopic skyplankton known as Cyclers. These organisms start life in the photic zones where they float due to biogenic hydrogen trapped inside each cell. Some cyclers absorb red light, some blue, and some absorb both, which results in a wide variety of reflected colours. The cyclers gradually increase in mass as they grow, releasing clouds of lightweight spores when mature. Eventually the cyclers sink down into the lower atmosphere, taking with them organic molecules produced by various photosynthetic processes

Because of the balance between temperature and pressure on this world, the hydrogen atmosphere becomes supercritical at a depth where the temperature reaches 300 kelvin due to the planet's internal heat sources. At this depth thebiochemistryof the cyclers is not viable, and they fall as organic detritus into the supercritical hydrogen layer.In the supercritical layer exists a wholly separate, seething benthic biosphere which uses supercritical hydrogen as a non-polar solvent within their cellular structure. This supercritical biosphere was not discovered until many centuries after explorers first reached Ruach. In this layer exist a range of microscopic and macroscopic lifeforms which rely on the food molecules which fall from above.

The benthic organisms are sometimes carried out of the supercritical layer through turbulent mixing; they in turn become organic detritus which enriches the carbon reservoir in the upper biosphere. In the upper atmosphere the cyclers benefit from this upwelling of carbon compounds, and in their turn become food for a range of floating and flying macroorganisms.

Macroscopic floating organisms in Ruach's atmosphere are also supported by biogenic hydrogen gas trapped within vesicles in their cells. Some are autotrophs, advanced multicellular plant-like organisms which have evolved from the cyclers and remain in the troposphere or the mesosphere for their entire life cycle, or heterotrophs grazing on the cycler skyplankton. These floating organisms may be very large indeed, but are very lightweight and delicate. Among the most successful and widespread phyla of floating macrobiota in the upper atmosphere of Ruach are theToroids, symbiotic autotrophs-heterotrophs shaped like translucent donuts covered with brightly colored photosynthetic symbionts. They filter nutrients through the central hole, which they can also use as a jet to move away from danger and steer. A typical Toroid individual may be two hundred metres in diameter.

The most advanced forms of life on Ruach are those which use active flight. Although these organisms still have hydrogen vesicles in most of their cells, they have a somewhat greater liquid component in their tissues, mostly water/ammonia mixtures capable of withstanding the cold temperatures among the cloud layers. One particularly ferocious predator species, the Ruach Singers, are long tube-like creatures which undulate like a sea snake through the atmosphere. They get their name for their extremely powerful sound, which they use for navigation, internal signaling, mating displays and as a sonic weapon.

The native macroorganisms of Ruach are used by theMirrored Owlclade as hosts for their own distinctive, distributed intelligence systems. The Mirrored Owls arrived in the Ruach system in 3822, and are believed to be descended from the ancient Genetekker society that once thrived among the moons of Jupiter, although this is somewhat controversial. Ruach macrospecies such as the Toroids and Singers (and their supporting biosphere) have been translocated to several other suitable gas giants throughout the Terragen Sphere, and often (but not always) act as hosts to distributed Mirror Owl societies within those new worlds.