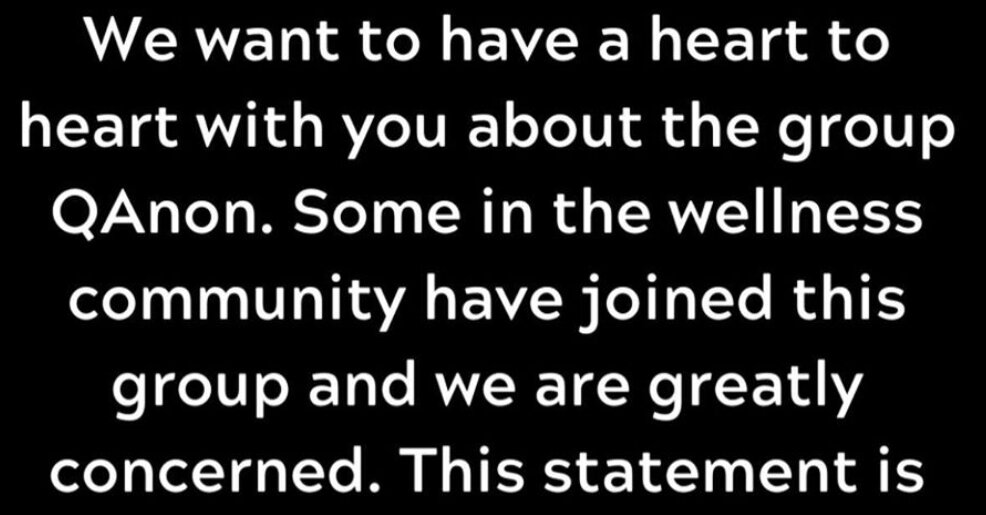 Several months ago, Seane Corn, a yoga teacher and Instagram influencer in Los Angeles with more than 100,000 followers, started noticing something odd happening on her social media feeds. Many of her peers in the online wellness community were sharing posts that seemed aligned with QAnon, the vast pro-Trump conspiracy theory that falsely alleges that a cabal of satanic pedophiles and cannibals runs the world.

Not all of these posts mentioned QAnon explicitly. Some were making milder appeals to stop child sex trafficking. Others were advocating against mask-wearing or pushing baseless conspiracy theories about Covid-19. Most were wrapped in the same Instagram-friendly pastel-colored aesthetics that you might use to advertise a crystal healing workshop or a book of Rumi poems.

“Every 5 posts, there would be a pink square with a pretty font, and it would say ‘Covid is a hoax,’” Ms. Corn said in an interview.

Eventually, Ms. Corn and other concerned wellness influencers decided to fight back. On Sunday, they posted a “wellness community statement” accusing QAnon of “taking advantage of our conscious community with videos and social media steeped with bizarre theories, mind control and misinformation.”

For years, QAnon was seen as a fringe right-wing phenomenon, populated by President Trump’s most hard-core supporters. But in recent months, it has made inroads with groups outside Mr. Trump’s base, including vaccine skeptics, natural health fans and concerned suburban moms. Its followers have hijacked the online #SaveTheChildren movement, and inserted QAnon messaging into claims about child exploitation and human trafficking.

These moves appear to have broadened the movement’s appeal. In a New York Times Op-Ed this month, Annie Kelly, a researcher who studies digital extremism, noted that QAnon’s “ranks are populated by a noticeably high percentage of women.” Conspirituality, a podcast about the intersection of New Age spirituality and far-right extremism, has compiled a list of roughly two dozen wellness influencers who have posted QAnon-related content.

Ms. Corn said that the wellness community’s emphasis on truth-seeking and self-improvement makes it particularly vulnerable to a conspiracy theory like QAnon, which is all about sowing distrust in mainstream authorities under the guise of “doing your own research.” She said that QAnon’s motto — “where we go one, we go all” — was classic “yoga-speak,” and that many of the QAnon-related posts she had seen, like a YouTube video that called President Trump a “light healer,” seemed to have been carefully made to appeal to New Age sensibilities.

“They’re using the same music we might use in meditation classes,” Ms. Corn said. “It does things to the body, it makes you more available and open.”

Ms. Corn said that she had lost some followers after her anti-QAnon post, but gained others who were grateful that she spoke out. And she said she worried that the conspiracy theory might still be gaining steam among wellness fans.

“I’m afraid that well-meaning folks who don’t understand the complexity of this misinformation will be seduced” by QAnon, she said. “They’re rolling out the yoga mat right now, and it scares me.”