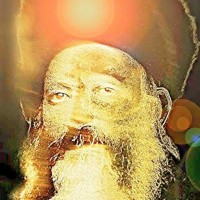 And from a distant world full of illuminations

The suns there are as broad as the ocean

On the face of the sapphire stone, there.

The news reaches me

Guiding me to the hidden Eden

We are marking Rabbi Avraham Itzchak HaCohen Kook TZ’L’s 85th  Yartzeit on Elul 3-Sat night/Sunday- this week. He left us many treasures guiding us to the hidden Eden.

From 1865 to 1935 Rav Kook lived an extraordinary life and offered profound guidance and leadership to the multitudes who loved him, to all Am Israel and to the world. Everyone who met him including Einstein, Chagall and the poor construction worker from Yemen realized that they were in the presence of a rare  holy being. His love, genius,wisdom and vision inspired all

I have recounted some of Rav Kook’s life history in previous postings. (1) I invite the reader to read this for more information about him. (Wikipedia is also excellent).

In a poll carried out in Israel on the event of Israel’s 60th Day of Independence celebrations, Rav Kook was voted the person who was most influential on shaping the modern State of Israel. Ben Gurion was number two. (2)

After his passing, his family and students continued his work of growing the Israelite physical and spiritual renaissance. Their impact on modern Israel is incalculable. It is estimated that close to 40% of the officers in the combat units of the IDF are graduates of the Rav Kook knitted kipah religious-zionism yeshivot. (3)

His writings and teachings are a legacy that is available to all humankind. They are indeed precious treasures waiting for us to uncover them and be illuminated by their light.

In honor of his  Yaartzeit, I would like to take this opportunity and share some of my favorite pieces from the ‘Kook book’:

“The heart must be filled with love for all.

The love of all creation comes first, then comes the love for all humankind and then follows the love for the Jewish people, in which all other loves are included, since it is the destiny of the Jews to serve toward the perfection of all things.

All of these loves are to be expressed in practical action, by pursuing the welfare of those we are bidden to love, and to seek their advancement…

The whole Torah, its moral teachings, the commandments and good deeds have as their objective to remove the roadblocks so that universal love should be able to spread, to extend to all realms of life.” (Midot HaRayah-Ahava)

“When one forgets the essence of one’s own soul, when one distracts oneself from attending to the substantive content of their own inner life, everything becomes confused and uncertain. The primary role of teshuva/return/penitence…is for the person to return to themselves, to the root of their soul…It is only through the great truth of returning to oneself that the person and the people, the world and all the worlds, the whole of existence, will return to their Creator, to be illuminated by the light of life.” (Orot HaTshuva/Lights of Return 15:10)

“All the defects of the world, the material and the spiritual are derived from the fact that every individual sees only the one aspect of existence that pleases them, and all other aspects that are uncomprehended by them seem to deserve purging from the world. The thought that whatever is outside one’s own is destructive and disturbing leaves its imprint on individuals and groups, generations and epochs. The result of this is a multiplication of conflict.” (Orot HaKodesh 1:121)

“The more clearly one studies the character of individual human souls, the more baffled one becomes over the great differences between personalities….It is, however precisely through their differentiations that they are all united toward one objective, to contribute toward the perfection of the world, each person according to their special talent…the opposites are integrated and related to the other, so that through the fusion of all the diverse minds and physiognomies, there emerges a unified structure of consummate harmony.” (Olat HaRayah- 1:388)

“A chaotic world stand before us as long as we have not attained that degree of higher perfection in which we unite all life-forces and all their diverse tendencies. As long as each one exalts themselves, claiming, ‘I am sovereign, I and none other’–there cannot be peace in our midst…. All our endeavours must be directed toward disclosing the light of general harmony, which derives not from suppressing any power, any thought, any tendency, but by bringing each of them within the vast ocean of light infinite, where all things find their unity, where all is ennobled, all is exalted, all is hallowed.” (Orot HaKodesh 2:588)

“The illumination to be bestowed by the Messiah is derived primarily from the philosophy of the unity of all existence.” (Ibid, 2:474)

“Teshuva emerges from the depths of being, from such great depths in which the individual stands not as a separate entity, but rather as a continuation of the vastness of universal existence….Tshuva is inspired by the yearning of all existence to be better, purer more vigorous and on than it is. Within this yearning is a hidden life force for overcoming every factor that limits and weakens existence.”  (Orot HaTashuva 6:1)

“It is necessary that the general human will be developed to its full potential. Then it is to be conditioned toward holiness…

How high the human can rise! They can make their will an active and dominant force in the world, radiating blessing on anyone they choose and influencing life according to their aspirations. ‘And be a blessing (Gen.12:2)-you will be a channel of blessing. (Genesis Rabbah 39)”  (Midot HaRaya-Ratzon/The Will)

“With every moral improvement, with every good attribute, every worthwhile subject of study, every good deed, even the smallest, even a goodly conversation, one raises their own spiritual state…

Each particular individual is related with a firm bond to general existence, and automatically when one part of existence rises to a higher state, all existence is uplifted. Thus one truly improves endless worlds with every good action.”(Midot HaRayah-Tikun/Improvement)

“The great dreams are the foundations of the world…The crudeness of conventional life, wholly immersed in its materialistic aspect, removes from the world the light of the dream, the splendor of its wide horizons, its ascent above ugly reality. Thus the world is in convulsion with pains engendered by the destructive toxins of reality, devoid of the brightness of the dream….The dream of the uninhibited , in revolt against reality and its limitations, is truly the most substantive truth of existence.” (Ibid 1:228)

“Waves from the higher realm act on our souls ceaselessly. The stirrings of our inner spiritual sensibilities are the result of the sounds released by the violin of our souls, as it listens to the echo of the sound emanating from the divine realm.” (Ibid 2:346)

“The affirmation of the unity of God aspires to reveal the unity in the world, in humankind, among nations, and in the entire content of existence, without any dichotomy between action and theory, between reason and the imagination. Even the dichotomies experienced will be unified through a higher enlightenment, which recognizes their aspect of unity and compatibility.” (Ibid 2:425)

When love possessed people see the world, living creatures full of quarrels, hatred, persecutions and conflicts, they yearn with all their being to share in those aspirations that move life toward comprehensiveness and unity, peace and tranquility…

When they confront the human scene, and find divisions among nations, religions, parties, with goals in conflict, they endeavour with all their might to bring all together, to mend and to unite…

They want that every particular shall be preserved and developed and that the collective whole shall be united and abounding in peace.” (Ibid 2:456-7)

“The perception that dawns on a person to see the world, not as finished, but in the process of continued becoming, ascending, developing-this changes one from being ‘under the sun’ to being ‘above the sun’, from the place where there is nothing new to the place where there is nothing old, where everything takes on new form. The joy of heaven and earth abide in them as on the day they were created.” (Ibid 2:535)

“The greater a person they more they must seek to discover themselves. The deep levels of our soul remain concealed from him so that we need to be alone frequently, to elevate our imagination, to deep our thought, to liberate our mind. Finally our soul will reveal itself to us by radiating some of its light upon us.” (Ibid 3:270)

There is so much more.  As one continues to read Rav Kook’s teachings, it becomes clear that the author was in a state of extraordinary consciousness. We are told that the great tzaddikim/righteous ones draw their inspiration from the light of the future. Rav Kook TZ’L was tasting from the Tree of Life in the Garden of Eden.

His Torah offers us a deep taste of the Torah of Eden.

Let us conclude with a passage in which he invites us to taste of Eden as well.

A Summons to Higher Contemplation

“If you will it human being, observe the light of the divine presence that pervades all existence. Observe the harmony of the heavenly realm, how it pervades every aspect of life, the spiritual and the material, which are before your eyes of flesh and your eyes of the spirit.

Contemplate the wonders of creation, the divine dimension of their being, not as a dim configuration that is presented to you from the distance but as the reality in which you live.

Know yourself, and your world; know the meditations of your heart, and of every thinker; find the source of your own life, and of the life beyond you, around you, the glorious splendor of the life in which you have your being.

The love that is astir in you – raise it to its basic potency and its noblest beauty, extend it to all its dimensions, toward every manifestation of the soul that sustains the universe, whose splendor is dimmed only because of the deficiency of the person viewing it.

Look at the lights, in their inwardness. Let not the names, the words, the idiom and the letters confine your soul. They are under your control, you are not under theirs.

Ascend toward the heights, because you are of mighty prowess, you have wings to soar with, wings of mighty eagles. Do not fail them, lest they fail you; seek for them, and they will at once be ready for you.

The forms that robe reality are precious and holy to us, and especially to all who are limited in their spiritual perception. But always, when we approach a life of enlightenment, we must not swerve from the perspective that light flows from the incomprehensible to the comprehensible, by way of emanation, from the light of the En Sof (“Infinite One”).

And we are summoned to share in the heavenly delight, in all the particularized perceptions, which are included in this universal whole, from which all the proliferations of life are engendered (Ibid 1:83-84).

We, who have wings to soar with, wings of might eagles are invited to share in the heavenly delight of the universal whole.

May we be so blessed.

May his memory be for a blessing.