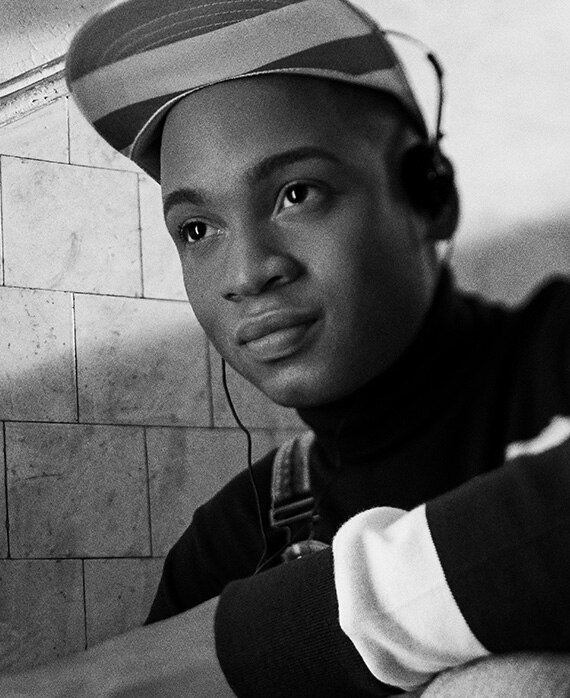 Damon Richards-Evangelistais an ambitious and aspiring ballet dancer fromAllentownwho, having been disowned and kicked from his biological family for his homosexuality, moved toNew York Citya homeless youth. He was brought into the ballroom scene by a new house MotherBlanca Rodriguez, soon taken into her graces atHouse Evangelistaand gaining enrollment into his dreamschool. He also found himself in an unexpected romance with another soul by the name ofRicky.

Continuing his enrollment in Helena St. Rogers‘ class through scholarships and working as a teacher of vogue, Damon graduates from the New School for Dance, but finds his love life and family dynamics on edge.

Damon was the only child of Lawrence Richards and his wife, the three living in Allentown, Pennsylvania. He sought an interest in dance, despite his father’s disapproval.[1]

After a class of dancing, Damon traveled back home by bus; entering the house, he retreated to his bedroom, placed a tape into the stereo, and danced in his room to the blaring music. However, he was interrupted by the arrival of his father. He was scolded, his father having discovered from a co-worker that he was attending dance classes behind his back and a gay magazine hidden underneath his bed. Damon confirmed the rumor of taking dance classes and that he was gay, leading to Lawrence repeatedly beating his son until he was pried apart.

Tossed onto the lawn and disowned by his father, Damon was confronted by his mother on his homosexualtiy; while she pressured him to denounce his sexuality as a sin, he stood silently before her, his belongings tossed to the grass. On his own, he traveled to New York City, resting in Washington Square Park and overseen by Pito.[1]

Damon settled in a spot in Washington Square Park, performing dances he learned from school for money. He is approached by a woman who asks him about his talent and raises an invitation to join her new house and showcase his talent with the ballroom community. Though he rejects the offer, citing that his dreams were bigger than hers, Damon takes a trip to one of the balls held that night, being educated on the community by Blanca, amazed at the faces and the atmosphere that surrounded them.

Afterwards, the two sit in a dinner for pancakes and share personal stories about their respective upbringings. He listens as Blanca tells him of her time before transitioning, attending balls during the night in her young adulthood and confessing her transgender identity that led to her disownment. Given her phone number, he is welcomed to join her home at any time in the future.

Waking in the park to his backpack and belongings stolen from him, Damon is initially offered to enter sex work for money, rejecting the offer before seeking Blanca at her apartment to join her House.[1]

Damon helps prepare Lil Papi Evangelista with a dance routine for the upcoming ball, though Angel and Ricky repeatedly tease. Checking his watch, he hurriedly gathers his belongings and rushed out the door to class, complimenting Papi on his improvement on the way out.

Arriving to the New School for Dance Studio late, he attempted to follow the instructor Helena St. Rogers; the class paused as he received a hard scolding from Helena. As he explained his tardiness, he was abruptly interrupted and told to leave the class. The following evening, Damon spoke with Blanca about her visit with his teacher. During the conversation, he was given a bus pass and became agitated when his punishment barred him from attending the upcoming Snow Ball.[2]

Damon was approached after dismissing his own dance class by a recruiter who gave him a business card, informing him to attend an audition to join Madonna‘s tour. Attending and performing at the auditions, he and Ricky Wintour at two of the remaining dancers set to return for a second audition. He engaged in conversation with his former lover about their future as back-up dancers for Madonna, striving that they each improve and do their best.[5]

Damon performed his final dance at a student of Helena St. Rogers. Graduating the New School for Dance, he retreats home with his House family and friends for cake and drinks. As he attempted to give a speech to celebrate his newfound accomplishment, he was repeatedly interrupted by small comments from a drunk Angel. Gradually, the two siblings continued to insult the other’s profession and life choices, Damon eventually revealing to Blanca that Angel had used cocaine. Despite Lulu questioning her sibling’s strange behavior prior, Damon repeatedly tells his House mother that it was the truth, having witnessed the action with their eyes.

After Blanca commands Lil Papi to take Angel to her room, Damon argued with her, critcizing her attitudes since getting her own salon and her favoritism, failing to discipline her daughter. He turned his attention to revealing more secrets when Pray Tell interjects into the heated conflict, demanding Damon changed his tone towards Blanca; he informed that Ricky was HIV-positive and that he was in a relationship with Pray Tell.[6]

Damon, being informed of Blanca‘s condition in May 1991, traveled from Paris back to New York City, where he reunited with his house Mother. Helping her prepare to leave the hospital, he shared stories about his travels through Europe while touring, even establishing his own house.[7]

Add a photo to this gallery