Many L.A. cops and firefighters aren’t vaccinated against COVID-19. Is this a public safety threat? When COVID-19 vaccines became available in California, police officers, firefighters and other first responders got priority access, and potentially more.

There were Airbnb gift cards, bicycles and cameras. Cash prizes in raffles ranged from $20 to $1,000. Some prison healthcare workers were made eligible for cash prizes just for sitting through a 30-minute “Vaccination Education” training session.

But despite the priority access and array of incentives, vaccination rates for police, fire and corrections agencies across L.A. and California have lagged well behind the state’s average for adult residents, according to a survey of agencies conducted by The Times.

While about 72% of adult Californians and 64% of Los Angeles residents 16 and older have received at least one vaccine dose, only about 51% of city firefighters and 52% of LAPD officers are at least partially vaccinated.

Less than 30% of L.A. County Sheriff’s Department staff members have received vaccine doses through employee clinics. (Some could have received shots elsewhere, but the department doesn’t keep track.) About 54% of employees of state prisons are at least partially vaccinated, but rates plummet at certain facilities — with one site recording just 24% of its staff fully vaccinated.

The low rates, which are not fully understood due to a lack of universal tracking, mar an otherwise positive outlook as the pandemic wanes and the state reopens. As first responders interact regularly with the public, the fact that many remain unvaccinated is a growing source of tension among city officials, public safety leaders and their rank-and-file workforces.

The debate centers on a troubling question: Are unvaccinated public safety workers a threat to public safety? 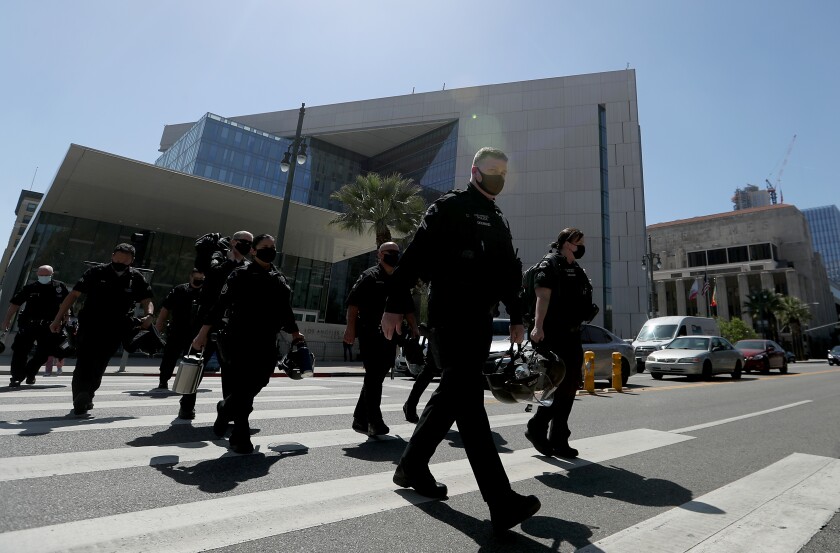 LAPD officers in April at the Los Angeles Civic Center.

Law enforcement analysts, activists and ethicists acknowledge that, for the most part, public safety workers should be entitled to make independent decisions about their health. But they also say the reluctance to get vaccinated against COVID-19 is a matter of public concern because of the jobs such workers do — which require them to work in close spaces, such as jails and courthouses, and interact with some of the state’s most vulnerable residents.

“As first responders, that’s a significant public health issue. It isn’t only a matter of their health, but others they come into contact with daily,” said Miami Police Chief Art Acevedo, who heads the influential Major Cities Chiefs Assn. “This is becoming a big discussion among the chiefs and health leaders.”

“We often interact with people who are high-risk or maybe can’t get vaccinated because they have cancer or have immune system problems,” said Arthur Caplan, founding director of the division of medical ethics at New York University’s Grossman School of Medicine. “We have to remember: We get vaccinated for others, too.”

The reasons for safety workers’ reluctance mirror those of the broader unvaccinated population, experts and police leaders say. Some who have had COVID-19 feel they are sufficiently protected by natural antibodies; others harbor political or conspiratorial beliefs — which experts reject — that the vaccines are unnecessary, ineffective or even dangerous.

Many in policing and other public safety sectors lean to the political right, among whom vaccines — and vaccine mandates — have been ridiculed, despite the fact that Republican leaders including former President Trump have been vaccinated.

Skepticism about vaccines was identified in the Los Angeles Police Department months ago, when an unscientific poll of 9,500 department employees found that just 60% were willing to take the vaccine when offered. About 20% said they needed more information, and 20% said they would decline vaccinations.

A major concern is the first responders’ role in interacting with vulnerable residents. Research has shown lower rates of vaccination among homeless and mentally ill people and among young Black and Latino residents of L.A. County. The lower rates also show up among low-income residents who may work multiple jobs or worry that vaccination side effects could cause them to lose pay, as well as among immigrant communities that face language barriers or where fears about immigration enforcement run deep.

Prisoners, a substantial portion of whom remain unvaccinated, have no choice but to interact with corrections workers in tight quarters — where infectious, airborne diseases like COVID-19 can spread quickly.

Community leaders believe that police officers and other public safety officials have helped spread the virus by not wearing masks and refusing to get vaccinated, though such cases are difficult to quantify.

Nearly 50,000 state prisoners have contracted COVID-19, and 224 have died, according to state data. Activists maintain that staffers are at least partially responsible for bringing the virus into the facilities.

Edwin Ramirez, a community activist in Pacoima, regularly sees police cars cruising around Van Nuys Boulevard and San Fernando Road and supports their presence as the neighborhood struggles with crime and homelessness. However, unvaccinated officers leave the public, the community and taxpayers at risk, he said, from both the virus and from officers calling in sick or having to quarantine.

“It’s a loss to the public when they’re out,” Ramirez said.

The extent of the problem remains unclear, in part because some agencies aren’t tracking vaccination rates among employees, including the California Department of Forestry and Fire Protection, the California Highway Patrol, the Orange County Sheriff’s Department, and the San Francisco and Sacramento police.

Also unclear is how or whether local agencies and governments will address the lagging vaccination rates as social distancing and mask mandates fall away — or whether they will reach a point at which vaccination among public health workers becomes mandated.

Some agencies claim to be legally barred from asking employees whether they are vaccinated; experts questioned this claim. Such a barrier, if maintained, may preclude robust efforts to identify unvaccinated employees and reduce their numbers through a mandate.

Other agencies say they are working diligently to increase vaccination rates before considering mandates, though the effectiveness of those efforts is in doubt. In one example, the Los Angeles Fire Department — whose personnel have worked at COVID-19 testing and vaccination sites — offered cash prizes to fire stations where 100% of the staff got jabbed. As of last week, none of the city’s 106 fire stations had qualified.

At a recent meeting of the Los Angeles Police Commission, LAPD Chief Michel Moore said he had not given up on increasing vaccination levels among officers.

However, the percentage of vaccinated LAPD officers has barely budged since April. Adding to the concern is the fact that some officers who received a first vaccination shot never showed up for the second, likely reducing their protection against COVID-19.

Chuck Wexler, executive director of the Police Executive Research Forum, a think tank that advises police departments nationwide, said he and many department chiefs are frustrated by the low vaccination rates.

Wexler said many agencies have considered mandates for officers, but very few, if any, have implemented them. Such mandates are highly controversial among public safety workers and their unions, he said, even as universities, hospitals, nursing homes and private employers are beginning to implement such requirements.

At an event to celebrate California’s reopening Tuesday, Gov. Gavin Newsom said the state was “not anticipating any mandates” that first responders be vaccinated “at this moment” but is “continuing to encourage” police, fire and corrections workers to get vaccinated through “trusted messengers” and “creative incentive programs.”

One state program, Vax to Win — which is open to the general public, not just to first responders — touts a $1.5-million grand prize, “$50,000 Fridays” and “dream vacations” for lucky, vaccinated winners.

Los Angeles City Councilman Paul Koretz, who chairs a committee focused on personnel issues, said he is concerned by the flat vaccination numbers, noting that the city needs to “get our firefighters and police to take this more seriously.”

If outreach efforts don’t work in coming weeks, Koretz may be open to implementing a vaccination mandate, he said.

Officials at the LAPD and the LAFD said they are not ready to discuss mandates.

Fire Chief Ralph M. Terrazas has left open the possibility of mandating vaccination, but not until the vaccines receive full approval from the U.S. Food and Drug Administration, rather than their current emergency use authorization. Full approval may come this year.

Capt. Stacy Spell, an LAPD spokesman, said any discussion about a mandate before full authorization is “premature.”

Spell said he could not discuss whether officers are required to be vaccinated against other diseases because of federal medical privacy laws.

The International Assn. of Chiefs of Police has said departments may mandate vaccines without violating federal statutes but may need to make religious or medical exceptions. The organization said such mandates would be no different from existing requirements that officers be immunized for tetanus and hepatitis.

The board of the Los Angeles Police Protective League, the union that represents rank-and-file officers, said the department has not approached it to discuss a COVID-19 vaccination mandate, but it would generally oppose such a requirement. Instead, the union board said, it will encourage members to be vaccinated and to “consult with their personal physician about any individual concerns or questions they may have about the vaccines.”

Freddy Escobar, president of the United Fire Fighters of Los Angeles City, said the union does not support a mandate but has been working with the department to increase the number of vaccinated firefighters and “will not stop pushing for additional LAFD vaccinations until we get as close to 100% as possible.”

Caplan, the NYU ethicist, said mandates may become necessary, but departments are right to first continue working to gain voluntary compliance. As they do, he said, they should stress the importance to employees’ personal health and to the broader community.

Caplan said public safety employees should care about the fact that getting vaccinated is not merely about their own health but also about that of others.