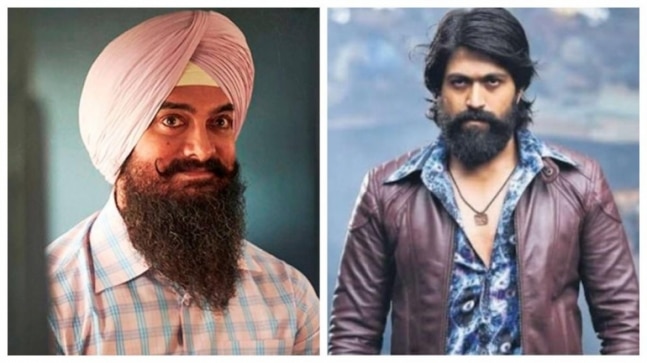 Aamir Khan recently announced that his upcoming film, Laal Singh Chaddha, will clash with Yash's KGF: Chapter 2 at the box office on April 14, 2022. In a recent interview to trade analyst Komal Nahta, Aamir said that he apologised to KGF 2 actor Yash, producer Vijay Kiragandur and director Prashanth Neel for choosing the same release date as theirs. He also offered to promote KGF: Chapter 2 ahead of the film's release.

Last week, Aamir Khan announced the release date of his long-pending film, Laal Singh Chaddha. The film will clash at the box office with Yash's KGF: Chapter 2. In an interview, he revealed that he wrote to the KGF 2 team explaining his decision to choose April 14, 2022, as the release date.

Aamir said that Baisakhi day was ideal for Laal Singh Chaddha's release. He added, "Ideally, I would never take a date which has already been finalised by the producer of another big film. I hate to give the impression that I am trespassing on someone else’s territory, but since I am playing a Sikh for the first time in my career, the Baisakhi day (14th April) seemed to be the most appropriate for the release of Laal Singh Chaddha."

He offered to promote KGF: Chapter 2 for choosing the same release date. He said, "Before I finalised the date, I profusely apologised to the producer (Vijay Kiragandur), director (Prashanth Neel), and lead man (Yash) of KGF Chapter 2. I wrote to them and explained my predicament. I told them how the lockdown had made matters difficult for all producers. I also explained that a Baisakhi release for my film would be ideal. They understood my viewpoint and were good enough to ask me to go ahead in spite of their film releasing on the same day. I was very touched by their gesture."

Aamir spoke to Yash over a call and revealed that he was a KGF fan. He shared, "In fact, I had a long heart-to-heart conversation with Yash who was very supportive of my plan. I told him that KGF was an established brand name and so, people would definitely patronise the sequel. I also told him that since his was an action film whereas mine was a family film as it was a love story, the two films would hopefully not eat into each other’s collections. I also volunteered to promote his film. I told Yash, I would be watching his film on 14th April in a cinema hall as I am a fan of the KGF franchise, like millions of others.”

LAAL SINGH CHADDHA VS KGF AT THE BOX OFFICE

Yash's KGF: Chapter 2 will release on April 14, 2022. Earlier, the makers of Prabhas's Salaar had also announced April 14, 2022, as the release date. However, since KGF and Salaar are produced by Hombale Films, the production house will soon decide to postpone Salaar's release.

KGF: Chapter 2 and Laal Singh Chaddha have been postponed multiple times due to the Covid-19 pandemic.