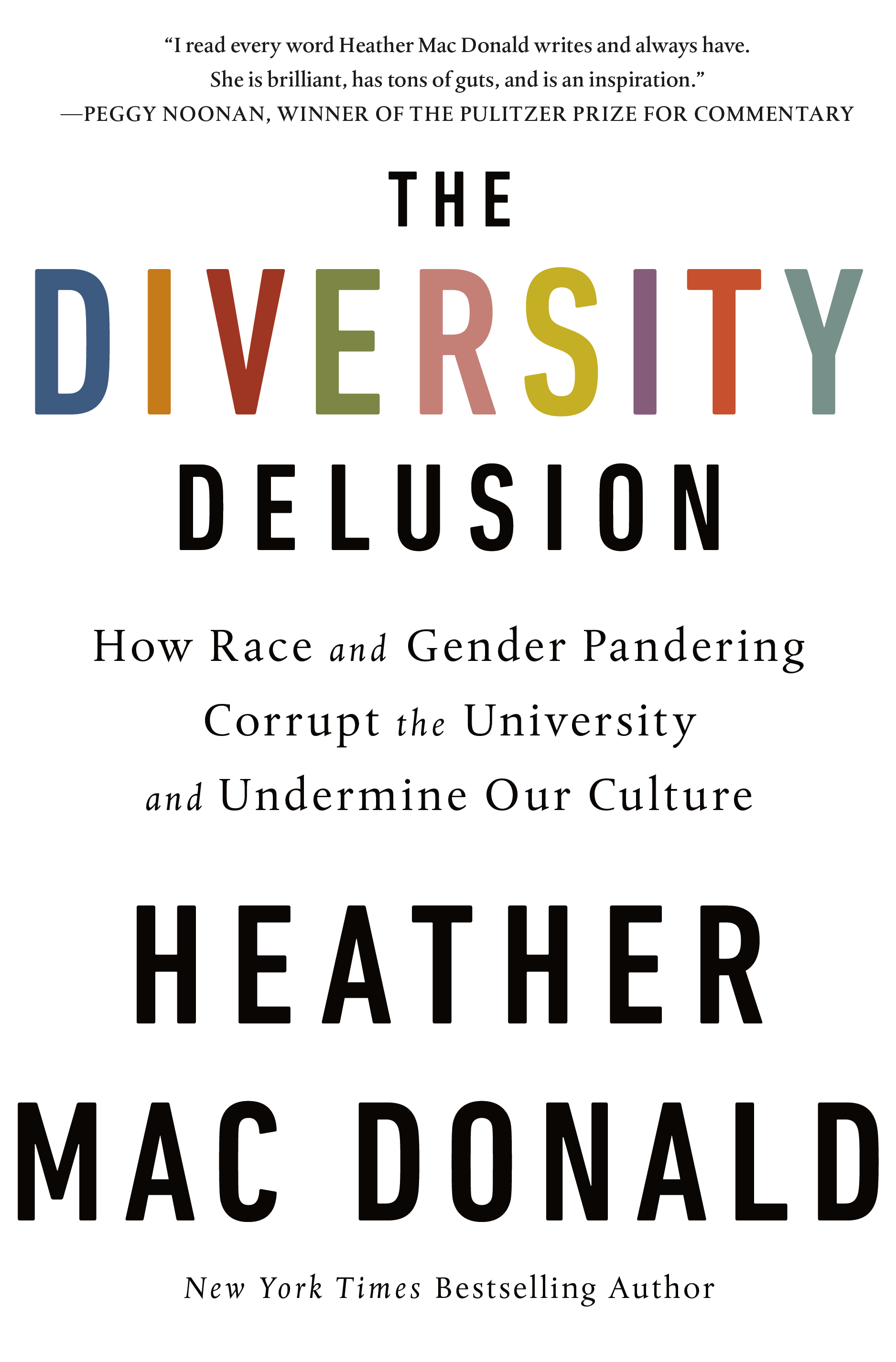 By the national bestselling author of The War on Cops: a provocative account of the erosion of humanities and the rise of intolerance

America is in crisis, from the university to the workplace. Toxic ideas first spread by higher education have undermined humanistic values, fueled intolerance, and widened divisions in our larger culture. Chaucer, Shakespeare and Milton? Oppressive. American history? Tyranny. Professors correcting grammar and spelling, or employers hiring by merit? Racist and sexist. Students emerge into the working world believing that human beings are defined by their skin color, gender, and sexual preference, and that oppression based on these characteristics is the American experience. Speech that challenges these campus orthodoxies is silenced with brute force.

The Diversity Delusion (now available in paperback) argues that the root of this problem is the belief in America’s endemic racism and sexism, a belief that has engendered a metastasizing diversity bureaucracy in society and academia. Diversity commissars denounce meritocratic standards as discriminatory, enforce hiring quotas, and teach students and adults alike to think of themselves as perpetual victims. From #MeToo mania that blurs flirtations with criminal acts, to implicit bias and diversity compliance training that sees racism in every interaction, Heather Mac Donald argues that we are creating a nation of narrowed minds, primed for grievance, and that we are putting our competitive edge at risk.

But there is hope in the works of authors, composers, and artists who have long inspired the best in us. Compiling the author’s decades of research and writing on the subject, The Diversity Delusion calls for a return to the classical liberal pursuits of open-minded inquiry and expression, by which everyone can discover a common humanity.

“I read every word Heather Mac Donald writes and always have. She is brilliant and has tons of guts and is an inspiration." — Peggy Noonan, New York Times bestselling author and Pulitzer Prize Winner for Commentary

“Why should we care what happens in the Ivory Tower? Because what happens there very soon happens everywhere. Heather Mac Donald warns us: attend to the ideology now dominating the humanities and social sciences. Designed to undermine the integrity of the individual and the state alike, it does just that. The universities have a mandate to produce informed, educated, productive citizens. They have been transformed, instead, into factories of ideology that mass-produce victims, certain in their oppression, searching everywhere for oppressors to blame and to punish. And the ranks of those deemed tyrants and persecutors threaten to swell until every single one of us is deemed guilty in some manner or another. Beware.” — Jordan B. Peterson, bestselling author of 12 Rules for Life

“Universities justify their privileged position by claiming to be forums for the promotion of clarity, logic, and evidence. Yet their own policies, affecting millions, are too often defended with factual howlers, logical non sequiturs and mindless boilerplate. Heather Mac Donald may not persuade you on every point, but with her spitfire writing and scorn for nonsense she is forcing universities to live up to their own principles.” — Steven Pinker, Johnstone Professor of Psychology, Harvard University, and author of Enlightenment Now

"Others besides Heather Mac Donald have indicted academia for devastating liberal education, but no one has ever documented the damage as Mac Donald does in The Diversity Delusion. It is crammed with facts and numbers that universities go to great lengths to hide. How she did it is a mystery, but The Diversity Delusion will be my master reference for anything I write on these topics." — Charles Murray, Emeritus Scholar, American Enterprise Institute

"If there were any justice in the world, Mac Donald would be knee-deep in Pulitzer Prizes and National Magazine Awards for her pioneering work." — David Brooks

"No journalist now writing about urban problems has produced a body of work matching that of Heather Mac Donald." — George Will

"You need to know Heather Mac Donald. She’ll mess with your mind and make you either up your politico-cultural game or admit you were wrong." — Debra J. Dickerson, Mother Jones

“Not since Alan Bloom's The Closing of the American Mind has a book so thoroughly exposed the damage done to American institutions—particularly universities—by modern liberalism's glib commitment to 'diversity.' Mac Donald unveils today's true operating principle: that claims of social justice precede the diminishment of Western greatness—a greatness that has (and will continue to) benefit the former victims of Western bigotry. This book is a story of what happens when too much insecurity seeps into a great civilization.” — Shelby Steele, author of Shame, White Guilt, and The Content of Our Character

"A beautifully-written, hard-hitting expose of the madness—from gender wars to diversity mandates to attacks on speech and academic freedoms—hat has seized hold of the American campus, made education less liberal, and is now doing the same to our culture." — Christina Hoff Sommers